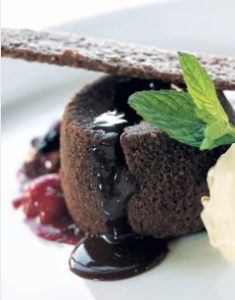 It was my turn to do dessert again and chocolate fondant was the dessert of the day at work so I thought, why not make some for home too? Mmmm....What is chocolate fondant you ask? Well it is a hot chocolate pudding that has a sumptuous melting middle of chocolatey gooeyness. Now who wouldn't want that?! For a little special twist instead of just using cream or ice-cream on the side I used marscapone and raspberries. Delicious!

- Fondants are supposed to be quite runny in the middle so ensure you cook for time given as a few minutes more will cook the pudding through - not a big drama but not really the point of the dessert.

- Ensure you grease the moulds well as the puddings need to slip out easily as if they catch and burst the runny middle will spill out spoiling the surprise - gentle hands also help!

- You can add some instant coffee for a mocha twist

- Brushing butter upwards in a mould creates tracks for the mix to cling to when it rises thus the upwards strokes ensure the batter clings up evenly not to the side and over the top!

7 To make raspberry marscapone cream whisk some icing sugar into the cream and then gently fold through the raspberries. If fresh raspberries aren't available I defrost frozen raspberries on paper towel which works just as well.